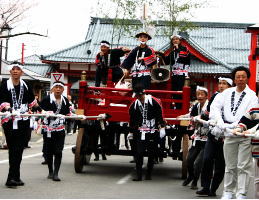 The “Yukake” Festival begins by receiving hot-spring water from Yu Shrine where a sacred spring has been running for thousands of years. A praying ritual is performed with a tub containing the water borne on the shoulders of the participants. Once the ritual is over, the tub containing the sacred hot water is mounted on a Yubiki-guruma cart, which is then wheeled through the hot-spring resort area as Kiyari chants are performed. As the sacred hot water is splashed over the spectators using bamboo branches with green leaves, those spectators pray for sound health, good luck, business success, and success in their exams. Everyone is welcome to participate. 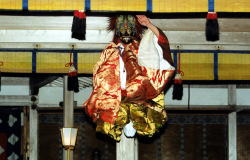 Daidai Kagura, a national important intangible folk cultural property, is a traditional dance and music performance that has been passed down for centuries by Yahiko Shrine. A total of 13 tunes are played on the dancing stage. Being the largest shrine in the Echigo region and notable for preserving a distinguished and quaint style, Yahiko Shrine has long been worshipped ardently by the imperial court, Shogunate government, local ruling families and warlords, as well as by large numbers of the local populace. The shrine still maintains its traditional dance and music rites. Designated as a national important intangible folk cultural property on May 22, 1978, Daidai Kagura consists of seven Chigo dances by children and six other dances by adults. It is one of the representative dance and music rites preserved since ancient times in Niigata Prefecture. The 13 tunes of Daidai Kagura are played only once a year on April 18, which corresponds to the day of annual celebration of the goddess. On this day, music is played on the dancing stage for about five hours, following the main festival. A Yokagura concert, featuring a selection of seven or eight tunes, is also held on the dancing stage which is lit by bonfires, starting at 7 p.m. This concert has been organized since 1988. 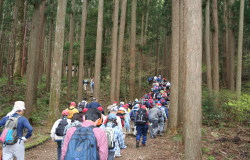 This mountain opening event marks the start of the Mt. Yahiko sightseeing season in the lively spring atmosphere. After members of the local climbing clubs and other participants go through a Shinto ritual in the worship hall of Yahiko Shrine, they then attend an inaugural ceremony held at the trail head of Mt. Yahiko and then begin their first mountain climbing of the year. Why don’t you join us and climb Mt. Yahiko to enjoy the fresh spring breeze?

Sato-kagura is a Shinto ritual intended to console holy spirits, receive their acceptance and ask them to descend to earth in order to assist humans in contacting a deity. According to ancient records, when Amaterasu-omikami shut herself in the Amano-iwato cave, a great number of deities gathered on the Ama no Yasukawa riverside and discussed how best to solve the problem. The dance is believed to originate from the Kami-kagura ritual in which Ame no Usume no Mikoto danced in front of the cave to lure her out.

A selection of beautiful bonsai plants grown with great passion by members of the Yahiko branch of the Nippon Bonsai Association are exhibited. We hope you will enjoy the exquisite art of bonsai that perfectly matches the atmosphere of the worship hall of Yahiko Shrine and the natural beauty of the surrounding landscape.

The Yahiko Firefly Festival features a number of exciting attractions, including performances by Yahiko-yama Taiko drums, Taisho Japanese harps and kenners, Yahiko Yosakoi Soran dance, open-air stalls, and gifts for children. And, of course, you can watch the fireflies in Yahiko Park.

Fireflies herald the arrival of the summer. You can watch the fireflies glow and fly around in the rich natural environment at the base of Mt. Yahiko. Fireflies, which originally could only be found in the Momiji-dani Valley of Yahiko Park, have since spread throughout the village. With the population of fireflies increasing every year, we can see swarms of naturally born fireflies dancing in the dark all around the village. Enjoy watching fireflies glowing and flying around in the rich natural environment!

The Yahiko Lantern Festival, the village’s traditional summer festival, is a three-day event where the local people enthusiastically get together. While the festival was traditionally held around June 14 by the lunar calendar, this was changed in 1961 to keep up with the times. The festival is now held around June 25. On the night of July 25, a mystical parade featuring large lanterns dedicated by Dai-touro Kochu groups from around the prefecture, and numerous small Sho-dengaku lanterns offered by local parishioner groups, are carried through the streets, with two Mikagura floats at the center of the parade and attended by two dancing children – Kagaraku and Amainumai – along with the chief priest, other priests and shrine officials. Accompanied by cheerful Doraku music that is played by court musicians, the parade of lanterns – that is more than one kilometer long – departs from the shrine and then circuits the town for about two hours before returning to the front of the worship hall. Then, the large lanterns are hung around a dancing stage set up in front of the worship hall, where the centuries-old Kagaraku and Amainumai dances are performed. The dancing ends at midnight. On the following day – the 26th – the Kangyosai festival is held, which completes the series of Shinto rituals. 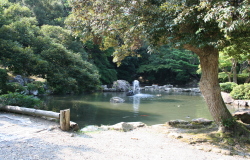 With an area of 160,000 square meters, Yahiko Park offers beautiful scenery in every season. In May, when the park is filled with new green leaves, red, white and other-colored azaleas delight the visitors’ eyes. About a thousand azaleas that produce flowers of various colors are planted in many spots around the park, including around the tennis courts and the Mangetsu-kyo bridge and in the central lawn square. From the top of Mt. Yahiko, you can enjoy panoramic views of the Sea of Japan and the Echigo Plain, while being surrounded by new green growt 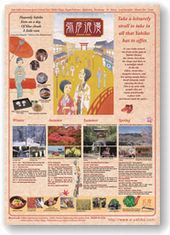